Well, folks, this is it. As this picture was taken I was on the downhill side of the final pass (“col” since I am now in a French speaking area). Parts of the descent were quite steep, hard on the beaten up feet. I again took to singing the Marine Corps hymn to take my mind off the discomfort in my feet. Then, for variety, I branched out to Lili Marlene “Vor der kasserne, Vor der grossen tor ….”.

That reminded me that as I was leaving Gsteig in the morning I passed a house and through an open window heard a radio playing:

******
I heard from the Three Amigos. They had to skip two stages, just like I did due to the snow. It confirmed my decision to spend the extra days in Grindelwal because of the snow.

Looking back on the first few days with a little perspective I now realize that I was pretty fatigued from the trans-Atlantic flight and lack of sleep. Don’t get me wrong – the routes those days (other than Day 1) were pretty demanding, but the combination with the other factors heightened the difficulty. I didn’t have any problem sleeping the first night since I hadn’t slept much on the plane. But, it caught up with me on the second and third nights when I had not yet adapted to the time change.  So, I was trying to go to sleep at 9:00 pm local time when my body was telling me that it was only about 3:00 pm. As a result, I didn’t get much sleep those first few nights. The result was that days that would be demanding and strenuous under any circumstances were made more so by the circumstances. Lesson learned.

This has been a great trip and it was fun to keep this account of the journey and to share the beautiful pictures with you all. I really do appreciate all the nice comments – it was morale-boosting to know that people, both friends and total strangers, were enjoying it. I apologize again for usually not being able to reply to comments. There simply was not enough time, much as I wanted to.

The pass I will cross is to the left, just out of the picture.

I dropped to the bottom of this valley (another 800 or so vertical feet to go from here) and then climbed to the pass hidden behind the tree on the right.

This was just a mile or so from the tank.

It never occurred to me that Switzerland could be tank country (although the rolling hills in this pic suggest otherwise). But, General Eisenhower didn’t think of the Ardennes as tank country, either.

This was outside a small military installation that I passed. I didn’t see any tanks other than this one on display. 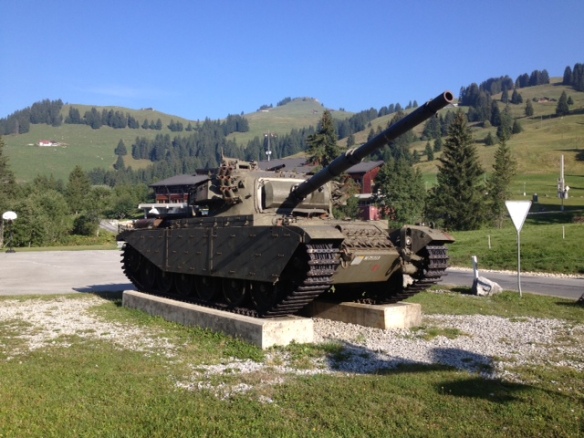 Today started easy enough, but that was deceptive. It was a long, hard day. Ron, it reminded me of a certain 19 mile march in November 1969.

For now, I am at the end of the tour.

Sorry to sound anti-climatic but right now this boy is tired and going to get some sleep. See, that is one of the differences between this walk and Ranger school – when I’m tired, I can go to sleep. I will write a more extended description later together with some reflections and further thoughts on this memorable trip.

Listen to the cow bells in the background. 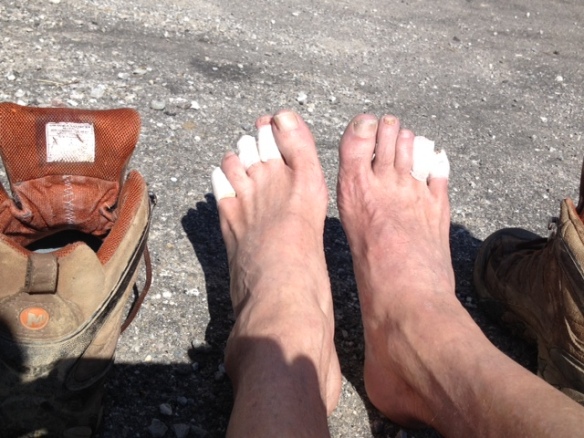 With the sound of music.

Before I left for this trip, one of my West Point classmates provocatively asked if I was going to be tra la la la la’ing through the Alps singing “The Sound of Music” à la Julie Andrews. I assured him that I would do something much more masculine, if not militaristic.

So, today I decided that some singing was needed to add color and atmosphere to the scene, just in case anyone was within earshot. So I strolled through the Alps belting out,

“From the halls of Montezuma
To the shores of Tripoli,

We will fight our country’s battles
In the air, on land and sea.

First to fight for right and freedom
And to keep our honor clean,

We are proud to claim the title
Of United States Marines.”

PS – I was in the Marine Corps before enlisting in the Army. Some things just never leave you. 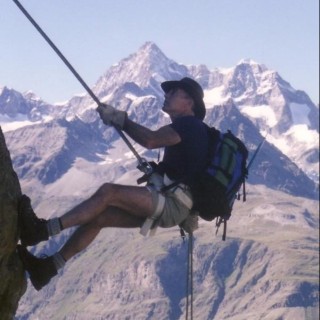 As a result of my time in the military I was able to do things I never dreamed I could do. Over the years my love of outdoor sports has grown, as I have been fortunate to be able to climb and hike from Alaska to Zermatt. I am blessed to have a wonderful and loving family -- my wife, Sandy, four children, Christian, Elizabeth, David and Kerri, a step-daughter, Rebecca, three grandsons, Braden, Hunter and Alex, and the world's best dog, Ginger the Standard Poodle. I practice law full-time with the firm of Merchant & Gould.